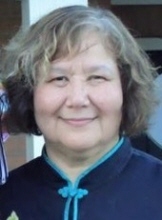 She was born Sarah Carmina Covarrubias to Lorenzo and Elvira Covarrubias on July 13th, 1948. Sarah grew up with her Parents and siblings in West Chicago, IL. After High School Sarah attended, and graduated from, the St. Francis School of Nursing in Evanston, IL where she met William and eventually married.  She was a devoted Army wife living on bases all over the world. After finally settling in West Chicago she dedicated her life to helping others through her 32 year nursing career at Central DuPage Hospital. Sarah enjoyed spending time in her garden, nature walkabouts, poetry, and spending time with her beloved children and grandchildren.

She is survived by her husband of 43 years, William III, her three children, William IV of Toronto, Amy (Ron) of Aurora, IL and Robert (Michelle) of Burnsville, MN; three grandchildren, Nicole, Bailey, and Michael; Her father Lorenzo Covarrubias of West Chicago and 6 Siblings, 18 nieces/nephews and countless other family and friends. Sarah is preceded in death by her Mother Elvira Covarrubias of West Chicago.

“I die first. You die second. So I won’t have to experience the forlornness and wail, a wail that will be heard a thousand years as you pass to the hereafter or feel the vastness of the universe. Without your heart living with mine unrecoverable, like a heart missing in action. ” -Sarah Bridgeforth, July 1983.

Visitation will be held on Monday, March 21, 2016 from 9 a.m. until time of prayers at 12 noon at Norris-Segert Funeral Home & Cremation Services , 132 Fremont St. (one block north of Washington St. and Main) West Chicago and proceed to St. Mary’s Church , 164 N. Oakwood Ave, West Chicago for Mass at 12:30 p.m. Interment Calvary Cemetery in West Chicago. In lieu of flowers, the family kindly requests that donations be made to the Free Spirit Siberian Rescue , P.O. Box 626, Harvard, IL 60033 or www.huskyrescue.org.

To order memorial trees or send flowers to the family in memory of Sarah Bridgeforth, please visit our flower store.