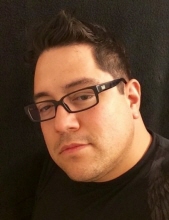 Ruben R. Campos , age 37, life-long resident of West Chicago, passed away on Monday, April 25, 2016. He was born on July 27, 1978 in Winfield, IL to Ruben and Rosalinda (Rojas) Campos. Ruben was a 1997 graduate of West Chicago High School. He was a 1st Degree member of Knights of Columbus-St. James Parish (Glen Ellyn), a musician, drummer, songwriter and artist. He won the title in wresting while in West Chicago Middle School and played football for WCAA and for the Wildcats in High School.

He was preceded in death by his paternal grandparents, Ramon and Apolinar Campos; uncles, Romeo and Reynaldo Campos and aunt, Sylvia Rojas.

To order memorial trees or send flowers to the family in memory of Ruben Campos, please visit our flower store.