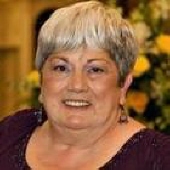 Rose Ann Genovesi, age 69, long time resident of West Chicago, passed away on Tuesday, September 10, 2013. She was born on November 2, 1943 to John and Juanita Smith. She was a graduate of West Chicago High School. Rose was united in marriage to the love of her life Joseph F. Genovesi who passed away in 1989. She was a retired bookkeeper at Newspapers Services of America. Rose enjoyed spending time with her children and grandchildren.
She is survived by four children, Joseph Genovesi (Cheryl Klein), Annette (Patrick) Treacy, Julie (Jeffrey) Pieroni and Michael (Tiffany) Genovesi; eight grandchildren, Joseph and Gianna Genovesi, Jenna Brauer, Tommy Treacy, Jeffrey and Becky Pieroni, and Mekayla and Trystan Genovesi; one sister, Bette Akin; and family and friends.
She is preceded in death by her parents and husband, Joseph.
Visitation will be held on Friday, September 13, 2013 from 3 to 9 pm at Norris-Walen-Segert Funeral Home, 132 Fremont St. (one block north of Washington St. and Main) West Chicago. Prayers Saturday, September 14, 2013 at 9:30 am from the funeral home to St. Mary's Church, 164 N. Oakwood, West Chicago. Mass 10 am. Interment at River Hills Cemetery in Batavia.
For info 630-231-0060 or www.norriswalensegertfh.com.

To order memorial trees or send flowers to the family in memory of Rose Genovesi, please visit our flower store.