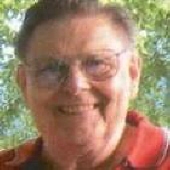 Robert G. Westrom, age 87, long-time resident of West Chicago, passed away Thursday, August 9, 2012, at his home surrounded by his family. Bob was born on February 4, 1925 in Des Moines, IA the son of the late Fred and Grace Westrom.

Bob served in the US Navy from June 1943 to December 1945 during WWII, where he served as a mineman and electrical specialist aboard multiple vessels in the Pacific Theatre. Bob was a lifetime member of the American Legion and VFW.

Bob and his wife Chicki owned and operated the Shoe Tree from 1954-1967, Microchem-Mosquito and Pest Control from 1967-1986 and Microdata-Microfilm Service Bureau from 1974 until his retirement in 2005. Bob was involved in many community groups such as the Jaycees, Jr. Jaycees, the Rotary Club and once received the Citizen of the Year honors. Bob was elected and served as a District 94 high school board member for 13 years, 9 of which as its President. He was a 20 year volunteer fireman for the West Chicago Fire Department and West Chicago Fire Protection District, serving in a later role as Deputy Chief. Bob was instrumental, along with a small group of others, pushing for the creation of the West Chicago Fire Protection District.

He is preceded in death by his parents, two brothers, Wendall and John Westrom, sister-in-law Arvilla, mother and father-in-law, E. Dean and Thelma Robertson; and one niece, Joanne Detente.

To order memorial trees or send flowers to the family in memory of Robert Westrom, please visit our flower store.