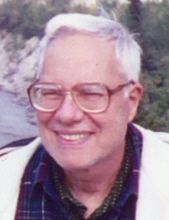 Richard William Claus ​, passed away on October 29, 2019 at the age of 82.  He was born in Chicago, IL on December 28, 1936.  Richard was an enthusiast of nature and protector of the environment, he worked to make the world a better place and leave this earth better than he found it for his children and grandchildren.  He volunteered with numerous organizations including Audubon, Wolf Road Prairie, the DuPage Forest Preserve district, PADS, and Aldersgate UMC as a trustee for many years.  He wrote a plan for a sustainable Senior community and a treatise on simplifying the English language.  He was a student of bridge and achieved a Silver Life Master status whilst playing competitively in his retirement.  As a loving father and husband, he enjoyed travel with his family and volunteered as a soccer coach, Cub Scout leader, and Sunday School teacher.  He enjoyed his friends and his family, he loved to laugh and to joke, as a child he had a nickname of gremlin for his antics.   His smile was his tell that he might be up to something.  He was preceded in death by his loving parents, Ethel and Arthur Claus, and brothers Robert and Laurence Claus.  He is survived by his wife of 46 years, Nancy, their two children Christy (Jeremy) and Walter (Melissa), his four grandchildren, Lily, Riley, Gretchen, and Isabell, brother Albert (Alison), sister-in law Betty, nephews Arthur, Laurence (Kate), Joseph, Michael (Amber), and niece Sarah.

Visitation will be held on Saturday, November 2, 2019 at Aldersgate United Methodist Church , 1753 S. Blanchard St., Wheaton, IL 60187 from 9 a.m. to 11 a.m. where at funeral service will follow at 11:00 a.m. Interment Private. Contributions in Richard’s memory can be made to Aldersgate UMC or an environment charity of your choice.

Arrangements by Norris-Segert Funeral Home and Cremation Services. For Info 630-231-0060 or www.norrissegertfh.com

To order memorial trees or send flowers to the family in memory of Richard Claus, please visit our flower store.