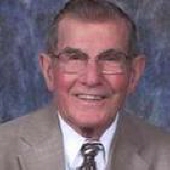 Ralph P. "Bud" Brucher, age 93, lifelong resident of West Chicago, passed away on Monday, February 28, 2011 at DuPage Convalescent Center in Wheaton. He was born on July 1, 1917 in West Chicago, Illinois to Harry and Bessie (Gould) Brucher. He attended St. Mary's grammar school and West Chicago High School. Ralph was united in marriage on July 3, 1940 to Lenore Mann. He worked for many years as a driver for Markl Dairy in West Chicago, then for the City of West Chicago until he retired in 1985. Ralph was a very active member of St. Mary's where he was an usher for more than 50 years, member of the Knights of Columbus Fr. Gaffney Council 1550, Boy Scout Troop 22 leader, and volunteered in many ways. He enjoyed bowling, golfing, taking care of his yard and fixing just about anything. Ralph was a great fan of the Chicago Cubs.
Ralph is survived by two children; Carole Weigand of West Chicago and Larry (Donna) Brucher of St. Charles; six grandchildren; Jeff (Denise) Weigand of West Chicago, Michelle (Jeff) West of Sugar Grove, Marcia (John) Verhaeghe of Sycamore, Tim Weigand (Candy Undesser) of Big Rock, and Mike and Christopher Brucher of St. Charles; nine great-grandchildren and two great-great grandchildren.
He is preceded in death by his parents; wife Lenore in 1999; son-in-law Kent Weigand in 1997; 5 brothers and 2 sisters.
Visitation will be held on Friday, March 4, 2011 from 3 to 8 pm at Norris-Walen-Segert Funeral Home, 132 Fremont St. (one block north of Washington St. and Main) West Chicago. Prayers Saturday, March 5, 2011 at 9:30 am from the funeral home to St. Mary's Church, 164 N. Oakwood, West Chicago. Mass 10 am. Interment at Calvary Cemetery in West Chicago. 630-231-0060 or www.norriswalensegertfh.com

To order memorial trees or send flowers to the family in memory of Ralph Brucher, please visit our flower store.