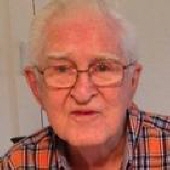 Paul E. Rupp , age 90, lifelong resident of West Chicago, passed away on Saturday, May 30, 2015. He was born on May 12, 1925 in West Chicago, Illinois to Charles and Mae Rupp. Paul was united in marriage to Barbara Humphries on April 30, 1966. He retired after 43 years of service as an industrial engineer for GM/Electromotive in LaGrange. Paul enjoyed working with computers, developing programs, working with puzzles, Sudoku, and taking pride in his lawn. He was a dedicated husband, dad and grandpa who was kind, mild-mannered, and was a gentleman who always had a smile.
Paul is survived by his wife, Barbara, of 49 years; daughters, Amy Jo Rupp and Sara (Douglas) Smith; granddaughter, Noelle; brother, Wilbur; nieces, nephews, family and friends.
He was preceded in death by his parents; one brother and three sisters.
Visitation will be held on Tuesday, June 2, 2015 from 3 to 7 p.m. at Norris-Walen-Segert Funeral Home, 132 Fremont St., West Chicago (One block north of Washington St. & Main St). Funeral services will take place on Wednesday, June 3, 2015 at the funeral home at 10:30 a.m. Interment Glen Oak Cemetery in West Chicago. For information (630) 231-0060 or www.norriswalensegertfh.com

To order memorial trees or send flowers to the family in memory of Paul Rupp, please visit our flower store.