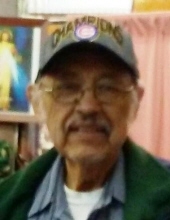 Onecimo Rios Jr. , age 79, longtime resident of West Chicago, passed away on Monday, July 31, 2017. He was born on January 3, 1938 in Pharr, TX to Onecimo and Julia Rios Sr. Onecimo was united in marriage on August 7, 1959 to Emma Hernandez. He retired from General Mills in West Chicago after 35 years of service and also worked at his wife’s bridal shop in West Chicago. He enjoyed collecting miniature cars, collecting hats and he loved his family.

He was preceded in death by his parents; daughter, Julia Tirado; brother, Israel; and sisters, Criselda and Rosa.

To order memorial trees or send flowers to the family in memory of Onecimo Rios Jr., please visit our flower store.