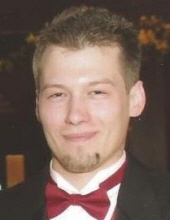 Nathan A. Birch , age 33, of West Chicago, passed away on Monday, July 10, 2017. He was born on March 12, 1984 in St. Charles, IL to William Birch and Kathleen Hummel. Nathan received an Associates in Applied Sciences Degree in Automotive Technology from College of DuPage in 2012 and was a Recertified Master Automotive Technician with 12 ASE Certifications. He worked as an auto technician at RX Automotive in St. Charles. Nathan loved working with cars and computers. He was a member of the Sons of the American Legion Squadron 300 of West Chicago and Amity Lodge #472 AF & AM of West Chicago. Nathan is survived by his parents, William Birch and Kathleen Hummel; sister, Melissa (Evan) Ferguson; godson, Mason Lofton; faithful companions, Zoe and Nick; and relatives and friends. He was preceded in death by his grandparents. Visitation will be held on Thursday, July 13, 2017 from 4 to 8 p.m. at Norris-Segert Funeral Home & Cremation Services , 132 Fremont St. (1 block north of Washington & Main), West Chicago. He will lie in state on Friday, July 14, 2017 from 9:00 a.m. until time of service at 10:00 a.m. at St. Michael’s United Church of Christ , 400 W. Washington St, West Chicago. Rev. Sue Ebersold officiating. Interment Glen Oak Cemetery in West Chicago. Contributions in Nathan's memory can be made to St. Michael’s United Church of Christ , 108 Sherman Street, West Chicago, IL 60185. For information, 630-231-0060 or www.norrissegertfh.com

To order memorial trees or send flowers to the family in memory of Nathan Birch, please visit our flower store.