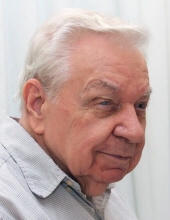 Milton Hellman , of Wheaton, Illinois, passed away peacefully in Christ on May 2, 2020, at the age of 91. Milton was born in Kansas City, Missouri.
After high school, Milton joined the US Army, then attended the Missouri School of Mines and Metallurgy in Rolla, Missouri.
He married Frances Ivigene Clark and moved to St. Louis, Missouri, in 1952. Milton worked as an electrical engineer at Union Electric power utility for 40 years and was preceeded in death by his beloved wife, Frances Ivigene. Loving father of Cindy Hellman-Wylie (Doug) and Richard Hellman (Joanne); grandfather of Ian Hellman-Wylie (Jasmine), Amber Hellman-Wylie, Leigh Hellman, Rachel Hinshaw (Alan) and Matthew Hellman, and great-grandfather of Rebecca Hinshaw.
Milton will be buried alongside his wife, Frances, in St. Peter's Cemetery, St. Louis, Missouri.

To order memorial trees or send flowers to the family in memory of Milton Hellman, please visit our flower store.