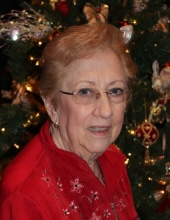 Marylou Madsen , age 87, of St. Charles, passed away on Friday, January 27, 2017 at Central DuPage Hospital in Winfield, IL with her loving family by her side. She was born in Chicago, IL to Ralph and Bernice Gernert. Marylou was united in marriage to Harold Robert Madsen on January 15, 1949. She enjoyed passing her time knitting. She was committed to her faith.  However, her greatest joy was the time spent with her family.

She was preceded in death by her parents; her husband, Harold Robert Madsen; and her sister, Dorothy VanVlymen.

To order memorial trees or send flowers to the family in memory of Marylou Madsen, please visit our flower store.