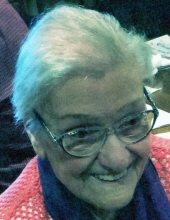 Mary E. Dieter Wolff Nelis, age 95, of West Chicago, passed away peacefully of natural causes on November 4, 2017. She was born on November 22, 1921, in Wheaton, IL, to Henry and Mathilda (Klein) Dieter and was raised in DuPage County amid her large extended family.

She was a devout Catholic, a volunteer and donor to many worthy causes, a lifelong Chicago Cubs fan, and an avid reader; she loved crocheting and other needlework, solving crossword and jigsaw puzzles, and was a tireless gardener. She loved her many pets and was never happier than when she was surrounded by her family and friends.

To order memorial trees or send flowers to the family in memory of Mary Nelis, please visit our flower store.