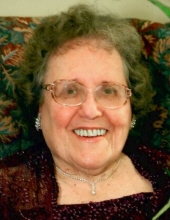 Martha Schuppe Tipper , 99 years old, was called to her eternal home on Tuesday, April 6, 2021 at The Grove of St. Charles.

She was born January 15, 1922 in Maywood, Ill., the daughter of John Jacob and Anna (Fritzler) Schuppe. She was baptized February 12, 1922 at St. Paul’s Lutheran Church and confirmed on April 14, 1935. She attended St. Paul’s Lutheran School in Melrose Park, Ill., and graduated from Proviso High School - Class of 1939. During her teen years she had a variety of jobs including working at the Strutzel’s Root Beer Stand in Maywood.

On March 15, 1947 she married John W. Tipper from Maywood. The family moved to West Chicago, Ill. in 1954 and became members of Trinity Lutheran Church.

She worked for various people in West Chicago before starting at American Potash (later known as Kerr McGee Corporation) in 1962. She retired in June 1977 and then in spring of 1978 returned to work at Kerr McGee for several more years. Martha did volunteer work at Trinity Lutheran Church, West Chicago Public Library, and Du Page Senior Citizens Council. In 2001, she moved to Hunt Club Village in St. Charles, Ill. where she organized many social events and started a Saturday breakfast known as “Aunt Martha’s Breakfast Bash.” In October 2014, she moved to Heritage Woods Assisted Living in South Elgin, Ill. and then in January 2017 to Pineview (later named The Grove of St Charles).

Anyone attending the visitation is required to wear a facemask inside the funeral home as per state guidelines and please be brief with your visit to allow everyone the opportunity to pay their respects to keep in accordance with the state and CDC-guidelines . For information, please call (630) 231-0060 or go to www.norrissegertfh.com.

The link for online streaming of the funeral service is http://www.asimplestreaming.com/mtipper/

To order memorial trees or send flowers to the family in memory of Martha Tipper, please visit our flower store.