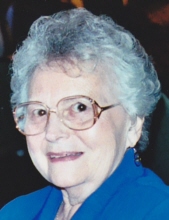 Marian “Ann” Kroning (Welter) , age 88, formerly of West Chicago, passed away Sunday, June 12, 2016 at DuPage Convalescent Center in Wheaton. She was born on January 19, 1928 in Wheaton to Nicholas and Mary (Weis) Welter. Ann grew up in Wheaton and West Chicago and graduated from West Chicago High School in 1946. She was a longtime member of Trinity Ev. Lutheran Church in West Chicago. She worked for many years as a bookkeeper for Leon C. Kroning & Sons and was as a devoted mother to her eight children. She loved her family, word puzzles, handcrafts, birds, gardening, and holding babies.

To order memorial trees or send flowers to the family in memory of Marian 'Ann' Kroning, please visit our flower store.