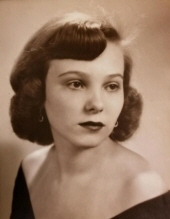 Margarete was born on March 4, 1934 in Friederichsberg, Germany, to her loving late parents Reinhold and Frieda Winter (nee Knaack). Beloved sister of Hans Winter of LaPort, IN. Beloved and adored sister and best friend of Horst and Margaret Winter of DeMotte, IN. Beloved aunt to their children Bridget (Jack) Goudy of Carol Stream, IL; Eric and Paul Winter of IN; and to their grandchildren Jennifer, Jamie, Jake, Ericka, Brittany, and Ryan; and their great-grandchildren.

Margarete grew up on a farm in Germany before she trained to be a tailor and immigrated to Gary, IN with her mother and two brothers in 1950. Early on she welded U.S. tanks and then was a seamstress for JC Penny. In the 1960's she moved to Norridge near Chicago. Totaling over thirty years in the food service industry, she trained as a waitress at Plentywood Farm Restaurant in Bensenville, and worked at the Regency Hyatt O'Hare for ten years as their head waitress and helped train managers.

Margarete completed an eighth grade education in Germany in four years in spite of WWII. Here she earned college credits at Triton College and College of DuPage. She spent her retirement years living next door to her brother and sister-in-law Horst and Margaret. She was an avid reader and loved gardening, sewing, visiting and traveling with her daughter and her children, as well as growing mums which she was licensed to sell.

Visitation will be at the Norris-Segert Funeral Home & Cremation Services, 132 Fremont St. (1 block north of Washington & Main), West Chicago, IL, on Saturday, January 6, 2017  from 10 a.m. until 1 p.m. with a memorial at 12:30 p.m. Interment following will be at the Forest Hill Cemetery in Glen Ellyn, IL.

To order memorial trees or send flowers to the family in memory of Margarete Wiesmayer, please visit our flower store.