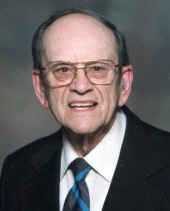 Lloyd John Gould , age 98, lifelong resident of West Chicago, passed away on Thursday, November 19, 2015. He was born on April 16, 1917 in West Chicago, IL to John and Pearl Gould. Lloyd was united in marriage to Mary Cormany on June 21, 1940. He retired after 43 years of service as a supervisor for Burgess-Norton Manufacturing Company. Lloyd was a longtime member of the First United Methodist Church. He enjoyed fishing, collecting stamps, and was a “Mister Fix-It” for everything.

He was preceded in death by his parents; wife, Mary; son, Richard; sister Norma; brothers, Daniel and Dwight.

To order memorial trees or send flowers to the family in memory of Lloyd Gould, please visit our flower store.