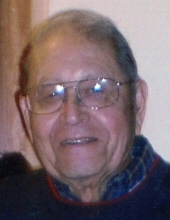 Leon Zarate , age 95, of Warrenville, passed away Thursday, December 15, 2016. He was born on October 9, 1921 in San Luis Potosi Mexico to Jacob and Emeteria Zarate. Leon attended St. Mary’s grammar school and West Chicago Community High School where he was on the football team. He was drafted into the US Army during WWII. In his younger days he worked as a caddy at St. Andrew Golf Course, and also at Monarch Foods in West Chicago where he met his future wife, Arlene Kroning. They were married on October 18, 1952 at Trinity Lutheran Church in West Chicago. As a family man, Leon worked as a printer for the Strathmore Printing Company for over 33 years and was a member of the 25 year Club. He also worked for the Kelmscott Printing Company until the age of 79. Leon did house painting for many family members during his lifetime and enjoyed helping his brother-in-laws working on many remodeling projects. During his retirement he played golf, did yard work and gardening. He loved reading the sports page about the Chicago Bears and up until last year could tell you how to fix the Cubs management. Even in to his early 90’s, he would go out to his beloved garage and tinker with something, sometimes even shoveling a little snow.

But his fondest memories were of spending time with his family, especially his grandchildren, and taking his weekly visits around town. Thank you to his friends at Mike and Denise’s, the Courtyard Banquets and Family Foods of Warrenville. Special thanks to the city of Warrenville, Ray A. Atkinson, for helping him and his good friend, neighbor and counselor, Emmah. He will be missed by all who knew him.

To order memorial trees or send flowers to the family in memory of Leon Zarate, please visit our flower store.