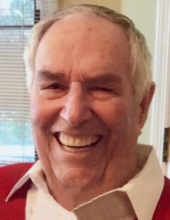 Leo Stephen Deutsch , age 92, of West Chicago, passed away peacefully on October 20, 2019 surrounded by family. He was born in Virgil, IL on January 16, 1927 to George and Jeanette (Garman) Deutsch. Leo was united in marriage on May 22, 1948 to Mary Virginia VanWinkle and on June 18, 1988 to Jacqueline Parsons. He served in the US Army during WWII. Leo retired from his own construction business, Leo S. Deutsch & Son, Inc. in 1989. He was a fireman with the West Chicago Fire department and member of the Moose, VFW Post 6791, American Legion Post 300, the Elks Club, Carpenters Union Local 558 and St. Mary’s Church.

He was preceded in death by his parents; wives; and brothers, Chuck and Harold.

Visitation will be held on Wednesday, October 23, 2019 from 4 to 8 p.m. at Norris-Segert Funeral Home & Cremation Services , 132 Fremont St. West Chicago. Prayers will be on Thursday, October 24, 2019 at 9:15 a.m. at the funeral home and proceed to St. Mary’s Church , 164 N. Oakwood Ave., West Chicago where a funeral Mass will be held at 10 a.m. Interment will follow at Glen Oak Cemetery in West Chicago. In lieu of flowers contributions in Leo’s memory may be made to American Legion Post 300, VFW Post 6791 or the Alzheimer’s Association.

To order memorial trees or send flowers to the family in memory of Leo Deutsch, please visit our flower store.