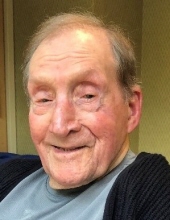 Kenneth A. Tinnes , age 97, longtime resident of West Chicago, passed away on Sunday, July 12, 2020. He was born on February 16, 1923, in Winfield, Illinois, to Michael and Laura Tinnes. He was a graduate of West Chicago High School and then served in the U.S. Army during WWII. Ken was united in marriage on February 29, 1944, to the late Charlotte Smith, whom he was married to for 67 years. He worked for many years for Karr Cleaners in Wheaton and was also a real estate agent. Ken was a member of American Legion Post 300 of West Chicago, member of the West Chicago Library Board, West Chicago Cultural Arts Center and The Rotary Club of West Chicago.   He was a superb watercolor artist, bike rider enthusiast, winter sports fanatic (ice skating, skiing and sledding), jack-of-all trades, delicious pie baker, socializer (always sharing a great story), and was a wonderful father, grandfather and great-grandfather who loved his family dearly.

Visitation will be held on Wednesday, July 15, 2020, from 3 to 8 p.m. at Norris-Segert Funeral Home and Cremation Services , 132 Fremont St., West Chicago (One block north of Washington St. & Main St). Interment private. (Anyone attending the visitation is required to wear a facemask inside the funeral home as per state guidelines) . Contributions in Ken’s memory may be made to the Alzheimer’s Association Greater Illinois Chapter, 850 Essington Rd, Suite 200, Joliet, IL 60435. For information, call 630-231-0060 or www.norrissegertfh.com

To order memorial trees or send flowers to the family in memory of Kenneth Tinnes, please visit our flower store.