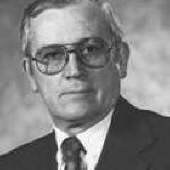 Joseph E. Ivanecky Jr., age 80, of North Aurora formerly of West Chicago, passed away July 31, 2010 at Provena Geneva Care Center in Geneva. He was born on October 13, 1929 in Chicago to Joseph and Florence Ivanecky Sr. Joe was raised in Berwyn and graduated from Morton High School in Cicero. He then served in the US Army during the Korean War. On May 7, 1955 he was united in marriage to Beatrice Bartanen. Joe was a manufacturing superintendent for GM (Electro-Motive) in McCook (LaGrange) and retired in 1985 after 38 years of service. He was a longtime member of the First United Methodist Church in West Chicago and lifetime member of the VFW Post 6791 in West Chicago.
Joe is survived by his wife Beatrice of 55 years; one daughter; Nancy (Scott) Hofer; three sons; Timothy (Ami), Joseph III (Carol) and Andrew Ivanecky; Six grandchildren; Matt and Holly Hofer, Pete Ivanecky, Davis Waller and Sam and Ben Ivanecky; one brother; Richard Ivanecky of AZ and one sister; Sandy (William) Morris of FL; and nieces and nephews.
He is preceded in death by his parents.
Memorial Visitation is Wednesday, August 4, 2010 from 4:00 to 8:00 pm at Norris-Walen-Segert Funeral Home, 132 Fremont St. West Chicago. A memorial service will be held on Thursday, August 5, 2010 at the First United Methodist Church, 643 E. Washington St., West Chicago at 11 am Rev. Steve Ziegler officiating. Graveside services will be held in Rockland, Michigan at a later date. In lieu of flowers contributions in Joe's memory may be made to First United Methodist Church, 643 E. Washington St.,West Chicago, IL 60185. 630-231-0060 or www.norriswalensegertfh.com

To order memorial trees or send flowers to the family in memory of Joseph Ivanecky Jr, please visit our flower store.