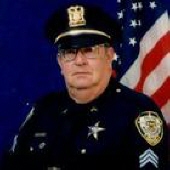 John G. Steele , retired WCPD, age 80, longtime resident of West Chicago, passed away on October 5, 2015. He was born on January 27, 1935 in Robinson, IL to Raymond and Beulah Steele. John was united in marriage on July 22, 1972 to Rita Forkin. He was a US Navy veteran and was a member of the American Legion. John was a retired West Chicago Police Officer with 28 years of service. He was a member of the Masons and enjoyed boating and fishing.
John is survived by his wife, Rita; children, Tom Steele, Shane (Linda) Schwarz, Sharon (Michael) Kraft and Raymond Steele; nine grandchildren; seven great-grandchildren; and family and friends.
He was preceded in death by his parents and sister.
Memorial visitation will take place on Thursday, October 8, 2015 from 4 p.m. until time of service at 6 p.m. at Norris-Segert Funeral Home & Cremation Services, 132 Fremont St. (one block north of Washington St. and Main). For Info 630-231-0060 or www.norriswalensegertfh.com

To order memorial trees or send flowers to the family in memory of John Steele, please visit our flower store.