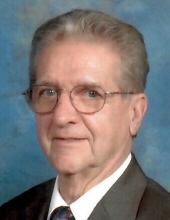 John H. Klingberg , age 93, lifelong resident of West Chicago, passed away peacefully on August 13, 2020. He was born October 6, 1926 in West Chicago, Illinois to Russell and Esther Klingberg. John was a 1945 graduate of West Chicago High School and then was deployed in the US Navy for 2 years. After returning home he married Joanne Spoden. He was active in the West Chicago Lions, charter member of VFW Post 6791, American Legion Post 300, Moose Lodge, school board member for District 94, an Elder of Faith Community Church and delivered Meals on Wheels. John was employed 52 years FNBC Bank of West Chicago (formerly West Chicago State Bank). He was a loving husband, father, grandfather, and great-grandfather.

He was preceded in death by his parents; five brothers and two sisters.

To order memorial trees or send flowers to the family in memory of John Klingberg, please visit our flower store.