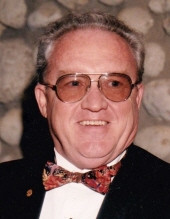 He loved sports and played many especially football and baseball.

He often described his DNA in four words…. Irish, Catholic, Democrat & Chicago.  His motto reads “To Learn, To Lead, To Love therefore To Live”.  A Good Life is Respect, Integrity and Kindness.  This Leprechaun sends you a lucky coin….Peace be with you….

To order memorial trees or send flowers to the family in memory of John 'Jack' Murphy III, please visit our flower store.