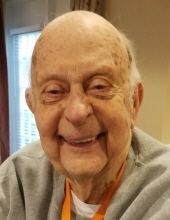 John Paul DeLap , age 91, longtime resident of West Chicago, passed away on Saturday, May 25, 2019. He was born on December 30, 1927 to Harve and Adena DeLap in Carbondale, IL.  He received his Bachelor’s and Master’s Degree from Southern Illinois University and was a proud US Army Veteran.  John served as a Corporal from 1946-1949, was a Communications Specialist in the Army, and spent his active duty at Panama Canal.

John came to West Chicago in 1960.  He began his career at West Chicago High School where he created WEGO’s first guidance counseling program.  He retired in 1987 after 27 years of service. John had a great fondness for his students and loved helping them find the right path for the future. He was very involved in the West Chicago Community where he volunteered for numerous organizations and served as a docent at the West Chicago City Museum for many years.   John was an avid coin collector, Civil War buff, and diehard fan of the St. Louis Cardinals.  He also enjoyed fishing with his nephews and discovering buried treasures with his metal detector.

Visitation will be held on Friday, May 31, 2019 from 4 to 7 p.m. with a time of celebration and storytelling at 6:00pm at Norris-Segert Funeral Home and Cremation Services , 132 Fremont St., West Chicago (One block north of Washington St. & Main St).  Coffee and donuts will be served in remembrance of John’s love of both.

Interment will be held at Oakland Cemetery in Carbondale, IL at a later date. In lieu of flowers, the family requests donations be made in John’s memory to the West Chicago High School Booster Club or the West Chicago City Museum. For information 630-231-0060 or www.norrissegertfh.com

To order memorial trees or send flowers to the family in memory of John DeLap, please visit our flower store.