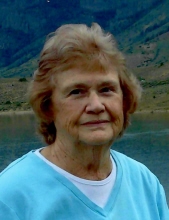 JoAnn Johnson, age 85, of Naperville IL, passed away on Sunday June 26th, surrounded by her loved ones. She was born August 1st, 1936, in Decatur, Tennessee, Daughter of the late Ottie & Nettie Chumney. JoAnn attended business school in Nashville Tennessee. She then met her husband of 65 years Jerry Johnson and married on February 9th, 1957. They moved from Tennessee to Illinois. Where they raised their family. Joann worked at Hitchcock publishing, and then worked for Arbor Electric until she retired. Her and Jerry loved to travel! They have traveled all over the western states, taken many cruises, and spent many winters in gulf shores Alabama. She is survived by her husband Jerry, daughter Theresa Chmielewski of Aurora, IL, (Rick), son Steven, (Bonnie) Johnson of Yorkville, Il. Grandchildren Brad Chmielewski, (Maeve), Laura Chmielewski, Kim Johnson, Amy Latsch, (Paul), and great granddaughter Brooklyn Johnson. She is preceded in death by her Parent's, Ottie and Nettie Chumney, her brother Gary Chumney, sister Mildred Goodman, her son Jeffrey, daughter Sarah, and great granddaughters Hannah, and Hailey Latsch. Visitation will be held on Thursday, June 30, 2022, from 11:00 a.m. until time of funeral services at 1:00 p.m. at Norris-Segert Funeral Home and Cremation Services (one block north of Washington St. and Main), 132 Fremont St., West Chicago. Burial will follow at Glen Oak Cemetery in West Chicago. For info 630-231-0060 or www.norrissegertfh.com
To order memorial trees or send flowers to the family in memory of JoAnn Johnson, please visit our flower store.