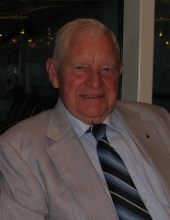 Jerry Dean Johnson age 90 of Naperville Illinois, passed away on Sunday October 2nd, 2022. He was born July 29th, 1932, in Bath Springs, Tennessee. He was the son of Bernice Johnson. Jerry Joined the Navy and served 3 years on the USS Jason on a repair ship. He then met his wife of 65 years, the late JoAnn Johnson, and they married on February 9th, 1957.

They moved from Tennessee to Illinois to work and raise their family. Jerry became an Electrician for IBEW Local 701 where he worked until he retired.

Jerry & JoAnn loved to travel! He loved traveling and sharing the experience with others. He has taken so many friends, and family, on different trips with him and JoAnn. Traveling out west, taking cruises, going overseas,

or his very favorite times were spending winters in Gulf Shores, or as he called it LA (lower Alabama).

Jerry was always saying how lucky and proud of his family he was. He loved how close we all were and took pride in that. He was so happy that he and JoAnn helped their 4 grandchildren become homeowners and have set up a college fund for their great granddaughter Brooklyn.

Jerry just lost the love of his life this year in June. Because of his deep faith we take comfort knowing they are together again.

Visitation will be held on Friday, October 7, 2022 from 11:00 a.m. until time of funeral services at 12:00 p.m. at Norris-Segert Funeral Home and Cremation Services, 132 Fremont St. (one block north of Washington and Main St.), West Chicago. Burial will follow at Glen Oak Cemetery in West Chicago. For info 630-231-0060 or www.norrissegertfh.com

To order memorial trees or send flowers to the family in memory of Jerry Dean Johnson, please visit our flower store.