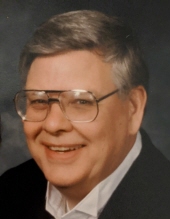 James W. Westrom , age 81, passed away on February 10, 2020. He was born on May 1, 1938 in Geneva, IL to John and Arvilla Westrom. Jim served in the US ARMY in Korea from September 1958 to July 1960, where he served as a Company Clerk and Personnel Specialist. Upon his return he worked for his uncle, Bob Westrom, who owned the Shoe Tree in West Chicago. In 1964, Jim would then start his career in the finance world with Associates Financial in West Chicago, which landed him on television with a popular commercial for the company. He quickly advanced to head of business loans, and would later transfer to their branch in Denver Colorado, where he was Branch Manager until 1987. Jim then took a position in Florida where he would finish off his career and retire as Assistant Vice President of lending. Jim loved the outdoors, he loved camping, hiking, gardening, astronomy, building model trains and playing chess.

He was preceded in death by his parents; wife Nancy; and sister Joanne Detente.

To order memorial trees or send flowers to the family in memory of James Westrom, please visit our flower store.