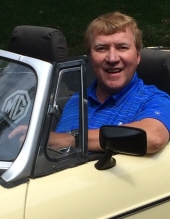 Jim moved to West Chicago early in life and graduated from West Chicago Community High School in 1964, where his love of music began. During these years, he met Margaret “Peggie” Sproat, and they married on June 22, 1968 at St. Mary’s Catholic Church.

Jim studied Music Education at Northern Illinois University and began his 38-year career as a music teacher in St. Charles School District 303 in 1969. He spent most of those years at Thompson Middle School teaching general music and directing choirs. As many of his former students would attest, he taught more than music. He challenged his students to be lifelong learners and encouraged them to find their passion in life. He once estimated he taught nearly 20,000 students during his tenure.

For most of Jim’s life, he worked multiple jobs. Not because he had to, but because he loved to work and had so many interests. Besides teaching, he worked at St. Andrews Golf & Country Club mowing fairways and greens for roughly 50 seasons. He also founded the band, Freshwater, which performed weekends at local clubs, weddings, and other events for more than 20 years.

Jim had many other interests in addition to music. He started running in 1980 and completed 19 Chicago Marathons. He earned his pilot’s license in 1994 and enjoyed recreational flying for more than 20 years. He was a great mechanic, too, and restored his third MG, a 1978 MGB, in the early 1990s, which is still running strong today. He was an avid golfer and bowler, and he loved to make people laugh.

As a man of service, Jim was choir director for several years at Batavia United Methodist Church. For more than 30 years, he was song leader at St. John Neumann Catholic Church in St. Charles, where he also served as a religious education teacher for nearly 20 years. In addition, he served several terms as a West Chicago alderman.

Jim was a loving husband, father, and grandfather who enjoyed spending time with his family and friends. He also loved to travel and took frequent trips within the United States and Europe.

Jim was preceded in death by his sister, Janice (Smith) Dellaert and his parents, Janetta (Heerdt) and Jacob Smith. He is survived by his wife of almost 53 years, Peggie (Sproat) Smith; his children, Lisa (Smith) and Todd DeSimone, Victoria (Smith) and Steve Gaudette, and Jason and Lisa (Krantz) Smith; his four grandchildren, Ella, Holly, Ben, and Josh; many cousins, nieces, and nephews; and countless other relatives and friends he loved and enjoyed so dearly.

In lieu of flowers, donations may be made to the James B. Smith Music Scholarship Fund c/o Victoria Gaudette, 1312 Creekside Drive, Wheaton, IL  60189, where his family hopes to honor his legacy by helping other WCCHS students study music performance and education.

To order memorial trees or send flowers to the family in memory of James Smith, please visit our flower store.