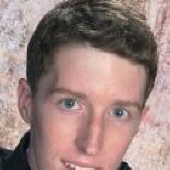 Jacob Andrew Carney, age 17, of Winfield, passed away suddenly on Sunday, November 14, 2010 after injuries sustained in a car accident. He was born on March 18, 1993 in Winfield, IL to Daniel Scott and Ellen Kay Carney. Jacob was a senior at West Chicago High School. He enjoyed music, riding his scooter, snowboarding, and hanging out with his brother and friends.
Jacob is survived by his loving parents, Scott and Ellen Carney; brother and best friend Benjamin Carney; paternal grandparents, Daniel and Barbara Carney; maternal grandparents, Harry and Joanne Darland; and his large extended family of aunts, uncles and cousins who loved him dearly.
Memorial visitation will be held on Thursday, November 18, 2010 from 3 pm to 7 pm at Norris-Walen-Segert Funeral Home, 132 Fremont St, West Chicago. Contributions in Jacob's honor may be made to his family through the funeral home. Donations will be used to honor Jacob's memory and to support causes significant to him, such as the development of a Winfield skate park. 630-231-0060. www.norriswalensegertfh.com

To order memorial trees or send flowers to the family in memory of Jacob Carney, please visit our flower store.