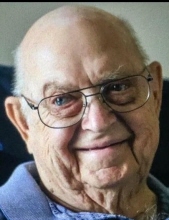 Henry “Hank” Herman Rathe , age 84, of Forsyth, MO, passed away on Thursday, April 28, 2016 at the Golden Living Center in Branson, MO. He was born on Aug. 23, 1931, in Elmhurst, IL, son of Henry H. Rathe Sr., and Julia (Korbel). Hank married Marilyn Alexander on August 5, 1950 at the First United Methodist Church in West Chicago. Hank was an Army Korean War Veteran, having served in the 31st Infantry regiment and was a recipient of the Purple Heart. After retiring from Northern National Lease, Hank and his wife Marilyn moved to Forsyth, MO. He was a member of the Forsyth United Methodist Church.

He was preceded in death by his wife, Marilyn Rathe (nee Alexander); daughter, Debra L. Davis; and his parents.

Visitation will be held on Wednesday, May 4, 2016 from 4 to 8 p.m. at Norris-Segert Funeral Home & Cremation Services , 132 Fremont St., West Chicago (One block north of Washington St. & Main St). Funeral services will take place on Thursday, May 5, 2016 at the funeral home at 10 a.m. Reverend Nancy Rethford officiating. Interment Glen Oak Cemetery in West Chicago. Contributions in Hank’s memory can be made to Oxford Hospice-Patient Donation, 3660 S National Ave, Springfield, MO 65807. For info (630) 231-0060 or www.norrissegertfh.com

To order memorial trees or send flowers to the family in memory of Henry 'Hank' Rathe, please visit our flower store.