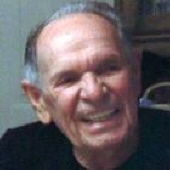 Gordon Dale Beutke , age 87, longtime resident of West Chicago, formerly of Long Point, IL passed away on Thursday, February 5, 2015 surrounded by his loving family. He was born on October 25, 1927 to Ernest and Mildred Beutke. He received his Bachelors Degree from Illinois Wesleyan University and was a proud US Air Force Veteran. Gordon was united in marriage on December 2, 1951 to Elizabeth “Betty” LeVelle. He worked for many years at JL Read Foods in Streator, then at Lockert Improvement in West Chicago and over 25 years at General Mills in West Chicago and St. Charles. After his retirement, Gordon worked part time at St. Andrews Golf Course and enjoyed a round of golf in his spare time. He and Betty have been faithful members of the contemporary service at First Baptist Church in Geneva for 30 years. Gordon and Betty enjoyed Country and Western dancing for many years. He was a devoted family man and especially enjoyed his grandchildren and great-grandchildren making them the center of his life.

He was preceded in death by his parents; brothers, Donald, Bob, Jack, William and Wally; and sisters, Maxine and Barbara Jean.

Visitation will be held on Sunday, February 8, 2015 from 1 pm until time of funeral service beginning at 5 pm at Norris-Walen-Segert Funeral Home, 132 Fremont St. (one block north of Washington St. and Main) West Chicago. Interment Private. Contributions in Gordon's memory may be made to CNS Hospice,690 E. North Ave., Carol Strea, IL 60188 or First Baptist Church of Geneva, 2300 South St., Geneva, IL 60134.
For information 630-231-0060 or www.norriswalensegertfh.com

To order memorial trees or send flowers to the family in memory of Gordon Beutke, please visit our flower store.