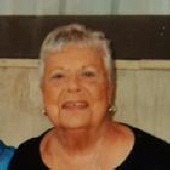 Gloria L. Baker , 84, of Mendota, Illinois, formerly of West Chicago, passed away unexpectedly at home on June 27, 2015.
Gloria was born in 1931 the older of two daughters to Howard “Happy” and Josephine (Gullickson) Hansen. At the age of 18 she met her life partner, John F. Baker Sr., and the two were married on May 19, 1951. He preceded her in death in 1997.
Gloria and John raised five boys in West Chicago, Illinois where her voice could be heard for several city blocks calling the “Baker boys” home at the end of the day. She was fiercely proud of her family that, at the time of her passing, included 5 sons, 9 grandchildren, and 7 great-grandchildren with another due in September.
When her children started school at St. Mary’s Elementary, Gloria decided to return to the classroom herself – completing her LPN of which she was understandably very proud. She worked the night shift for many years at Geneva Community Hospital and, in later years, for a variety of long-term care facilities in the area. After her sons left the nest, she and John moved to Geneva, Illinois where they lived for the next 20 plus years. She moved to Mendota, Illinois soon after John’s passing where she enjoyed many years of retirement.
In her younger years, Gloria developed a love of knitting. She regularly knitted hats and scarves for everyone she knew. The Christmas stockings she knitted are still used today by her family. You knew you were an “official member” of the family when you received your own personalized Christmas stocking from Gloria.
Reading was always one of Gloria’s passions. She would read everything she could get hers hands on from historical memoirs to novels. She was offered a tablet on several occasions to more easily access her books – but always refused, as she said that she “needed to feel the book in her hands.”
Gloria enjoyed swimming and continued to do so until her health made it impossible. She also enjoyed regular Bible study with her friends in Mendota. She loved watching movies – particularly action movies. Like her husband John, she was a devoted (and long-suffering) Chicago White Sox fan – and rarely missed a game on television.
Those left to honor Gloria’s memory include: her sister, Pat, Pennsylvania; sons John Jr. (Mary), Davenport, Iowa; Michael (Cathie), Long Beach, Calif.; Kevin (Norma), Warrenville, Ill; Patrick (Karon), Mendota, Ill; and Terry, Leeds, Ala; 9 grandchildren, John III, Maureen, Kristine, Keegan, Nolan, Brian, Jodie, Erin, and Shannon; and 7 great-grandchildren.
Per her request cremation rites have been accorded. A memorial service will be held for family and friends at on Saturday, August 8, 2015 at Norris-Walen-Segert Funeral Home, 132 Fremont St. (one block north of Washington St. & Main) in West Chicago, Ill. from 10:00 a.m. until time of service at 2:00 p.m. An inurnment service will follow at Calvary Cemetery in West Chicago.
Memorials may be made to a charity of your choice, or simply perform a random act of kindness in Gloria’s memory. The family welcomes your personal memories or online condolence at merrittfh@comcast.net

To order memorial trees or send flowers to the family in memory of Gloria Baker, please visit our flower store.