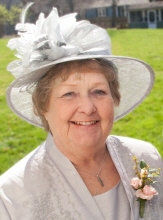 Geraldine (Geri) Levine Nelson Lemley, 83, passed away February 17, 2022 in Aurora, IL after a short illness, although she had suffered for many years with several painful aliments.

She was born in Marietta, OH in 1938 to Herbert and Grace Nelson, and was a graduate of Marietta High School. After graduating, she married Donald G Lemley, Sr. Together, they had four children, raised six children and hosted many “adopted” children.

In 1983-84, while living in Canada, she learned the French art of “paper tole” and upon returning to WV, she began selling her artwork through “Geri’s Gestures.”. Shortly thereafter Geri was recognized by Tamarack Marketplace as a juried artist.

After her husband’s death, in 2009, she moved to Louisville, KY and then to Montgomery, IL to be closer to her children. After moving to Illinois, despite physical limitations caused by severe arthritis, she began using her sewing as an avenue to help others. She made over 6,000 dresses and unknown number of “britches” that were sent to children all over the world. When she was in too much pain to sew, she took up knitting hats for others and often donated them to local homeless shelters. Geri was known for her need to be “doing something” and she encouraged others to do likewise. She was also known for being the person to call if you had any need. She would drop everything to be of service to others. She will be remembered as a loving wife, mother and grandmother and a dedicated servant of Christ.

Visitation for Geri will be held on Saturday, March 5, 2022 from 2-3:00 pm followed immediately by a Memorial Service 3:00 pm at Norris-Segert Funeral Home and Cremation Services, 132 Fremont St., in West Chicago, IL.(At the request of Geri's family all attendees are asked to wear a facemask and practice social distancing)

In lieu of flowers, the family requests donations to be made in Geri’s honor to the India Missions, P.O. Box 1126 Clinton, TN 33717

Burial will be at Cunningham Memorial Park, St. Albans, WV

Geri's memorial service on Saturday will be livestreamed. Please click on her link https://www.asimplestreaming.com/glemley/

To order memorial trees or send flowers to the family in memory of Geraldine Levine Nelson Lemley, please visit our flower store.