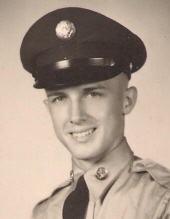 In loving memory of Gerald Thomas Kwosek , 71, Gilbert, AZ. Gerald was born May 16, 1945 in Independence, Wisconsin to Thomas and Vivian Kwosek. He served in the US airforce and the army in the 1960s. Gerald was united in marriage to Joan for 43 years. He retired from AT&T in 1998 after 35 years of service. He enjoyed fishing and bowling and watched golf tournaments in his spare time.

Gerald is survived by his father, Thomas Kwosek; his wife Joan Kwosek and his children Brian Goss/Rossi, of Tampa, FL; Michael Goss/Kelly, of Surprise, AZ; and Mark Kwosek of Glendale, AZ. And his grandchildren Megan, Matthew and Andersen Goss. His brothers, Robert Kwosek/Glenda, of St. Charles; Dennis Kwosek/Peggy, of Oswego, and step-brother, Dale McKinney Jr./Tammy of Lebanon, TN. He was predeceased by his mother, Vivian McKinney, of Lebanon, TN and his brother, Gary Kwosek of West Chicago, IL.

To order memorial trees or send flowers to the family in memory of Gerald Kwosek, please visit our flower store.