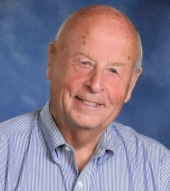 Floyd O. Fielitz , age 76, of West Chicago, passed away on Tuesday, October 11, 2016. He was born on March 13, 1940 in Elmhurst, IL to Herbert and Alvina Fielitz. He served in the US Army, from 1963-65 during the Vietnam War. Floyd was united in marriage to Katherine “Kate” Fielitz (Zbilski). Floyd loved his family, friends and church.  He was a dedicated member of St. Andrew Lutheran Church in West Chicago. St. Andrew’s has always been Floyd’s social and religious outlet that has brought much joy and fulfillment to him through friends and God.  Floyd was involved in the St. Andrew Men’s group, maintaining the Church property and giving of himself, in many ways, to his Church community. St. Andrew’s was his “Home away from Home.”  He owned “Floyd’s Automotive Gas Station” on St. Charles Road in Carol Stream for 16 years and worked as a mechanic for the City of Bartlett Municipality for 14 and a half years. He enjoyed his retirement years golfing, having fellowship with friends, and fishing with his brother Bob in Minnesota.  Floyd would like to be remembered as a “huggable kind of a guy!”

To order memorial trees or send flowers to the family in memory of Floyd Fielitz, please visit our flower store.