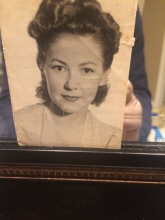 Esther Alette Stults , age 100, longtime resident of West Chicago and  owner/operator of the Coach Light Motel, passed away peacefully on Thursday, December 28, 2017. She was born in Chicago on August 5, 1917, to Ole and Marie Lorentsen and spent her childhood years in River Grove, IL, where she was a graduate of East Leyden High School. As a young woman, she worked at Mars Candy Company, Sears Roebuck and supported the World War II effort as “Rosie the Riveter” for Douglas Aircraft.

She and her husband, Jon Jay Stults, were married in 1935. They lived in Franklin Park, Glen Ellyn, Wheaton and Rockford prior to moving to West Chicago in 1955 and building the Coach Light Motel on North Ave. Following her husband’s death in 1965 at age 50, she continued to own and operate the motel until 2001 when she was forced to close for health reasons. She became an accomplished, successful business woman and raised her family in a loving and strong way, nothing was ever too hard and she never complained or had a harsh word for anyone.

In addition to operating the motel, Esther also enjoyed owning, breeding and racing harness horses.  She loved and cared for many cats to the point that her grandchildren nicknamed her “Kitty Gram”. She was an avid collector of antiques and collectibles and also enjoyed gambling at the river boats and spending time with her sisters. She and her family were very proud of their Norwegian heritage, 101% Norwegian.

She is survived by her daughter, Candice (John) Wiseman of Batavia, IL, and her son, Jon Stults (Martha) of Maple Park, IL; grandsons, Jon and Luke Stults of North Aurora, IL, and Scottsdale, AZ, and Dan (Tonya) Krol and granddaughter, Shannon Krol, both of Phoenix, AZ.

In addition to her parents and husband, she was preceded in death by three sisters, Myrtle, Clara and Helen, two brothers, Harold and William, and a grandson, Michael Jon Krol.

Cremation was arranged by Norris-Segert Funeral Home in West Chicago. www.norrissegertfh.com. A memorial celebration of her life will take place at a later date.

To order memorial trees or send flowers to the family in memory of Esther Stults, please visit our flower store.