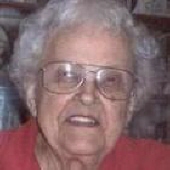 Elsie Ruth Schramer, age 91, long-time resident of West Chicago, passed away Tuesday, April 24, 2012. She was born on April 3, 1921 in Chicago, IL to Michael and Natalie Fitzner. Elsie was united in marriage on June 29, 1940 to John J. Schramer. Elsie enjoyed sewing and quilting and she loved her family.
She is survived by her husband of 71 years, John; daughters, Bonnie (late Ray) Curby of West Chicago and Patty Harker of Batavia; four grandchildren, Debbie Doyle, Kristi (John) Pokornowski, Kevin Curby and Jeff (Carol) Curby; six great-grandchildren; five great-great grandchildren; one brother, Arthur (Wilma) Fitzner and many relatives and friends.
She was preceded in death by her parents, brothers Eddie and Paul and sister Frieda.
Visitation Thursday, April 26, 2012 from 3 to 8 pm at Norris-Walen-Segert Funeral Home, 132 Fremont St. West Chicago. Prayers Friday, April 27, 2012 at 9:15 am from the funeral home to St. John the Baptist Church in Winfield. Mass 10 am. Interment Private. For information, 630-231-0060 or www.norriswalensegertfh.com

To order memorial trees or send flowers to the family in memory of Elsie Schramer, please visit our flower store.