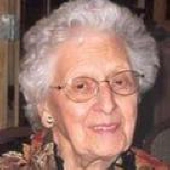 Dorothy Jane Rakow (nee Glasshagel), age 99, of Wheaton, former long time resident of West Chicago, passed away Friday, June 21, 2013. She was born on March 1, 1914 in Warrenville to William and Augusta Glasshagel. Dorothy was united in marriage to Willard Rakow on September 4, 1936. She was a lifetime member of Trinity Evangelical Lutheran Church in West Chicago where she was active in the Women's Guild and Golden Agers and cooked for all Church functions. Dorothy worked in the cafeteria at West Chicago High School for many years, and was a cook at the DuPage County Youth Home. She was member of the VFW Post 6791 ladies auxiliary and big supporter of the DuPage County Fair. Dorothy enjoyed cross-stitching, all animals, gardening, and cooking Sunday dinner every week for her family who she loved greatly.
Dorothy is survived by her children James (Christine) Rakow and Jane Rakow, both of West Chicago; grandchildren, Michael (Julie), John (Amanda) and Beth Rakow; great-grandchildren, Alexandra, Isabella and Esther; and many relatives and friends.
She was preceded in death by her husband Willard; sisters, Ruth Lanz, Helen Gaede, Stella Gaede and Esther Kruse; and brother, George Glasshagel.
Visitation will be held on Thursday, June 27, 2013 from 3 to 8 PM at Norris-Walen-Segert Funeral Home, 132 Fremont St. (one block north of Washington St. and Main) West Chicago. Funeral service will be held on Friday, June 28, 2013 at 11:00 AM at the Funeral Home. Reverend Fred Gaede officiating. Interment Lakewood Memorial Park in Elgin. Contributions in Dorothy's memory can be made to Trinity Evangelical Lutheran Church, 331 George St., West Chicago, IL 60185.
For information 630-231-0060 or www.norriswalensegertfh.com

To order memorial trees or send flowers to the family in memory of Dorothy Rakow, please visit our flower store.