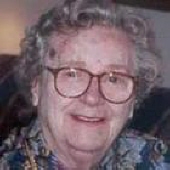 Dorothy Ruth Lynch M.D., age 90, lifelong resident of West Chicago, passed away Wednesday, September 28, 2011. She was born on November 6, 1920 in Geneva, IL to Raymond and Ruth Dieter. Dorothy was united in marriage on February 16, 1952 to Harry Lynch. She was the first pediatrician in West Chicago and practiced for over 30 years, first female chief of the medical staff at Central DuPage Hospital and chairman of the DuPage County polio vaccination program in the 1960's. Dorothy loved her farm, horses, dogs and especially her "kiddos".
Dorothy is survived by her daughter, Kathleen (Orrin) Dukleth of Glen Ellyn and son, Michael M.D. (Mary Ann) Lynch of Deerbrook, WI; five grandchildren, Karen Lynch, Steven, Philip, Matthew and Daniel Dukleth.
She was preceded in death by her husband Harry in 1996; parents; and one brother, Howard Dieter.
Visitation Sunday, October 2, 2011 from 3:30 to 7 pm at Norris-Walen-Segert Funeral Home, 132 Fremont St. West Chicago. Prayers, Monday, October 3, 2011 at 9:15 am from the funeral home to St. John the Baptist Church in Winfield. Mass 10 am. Interment Calvary Cemetery in West Chicago. Contributions in Dorothy's memory can be made to Mercy Home for Boys and Girls, 1140 W. Jackson Blvd., Chicago, IL 60607. For information, 630-231-0060 or www.norriswalensegertfh.com

To order memorial trees or send flowers to the family in memory of Dorothy M.D., please visit our flower store.