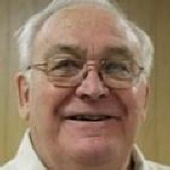 Donald N. Hensel, 85, passed away Sunday, February 26, 2012 in Winfield, Illinois.
Don was born on the family farm on Hawthorne Lane and always called West Chicago home. Growing up close to the high school allowed him to get up shortly before class, grab a homemade biscuit fresh from the oven, hop a fence and get to class on time. He married on August 26, 1950 to his hometown love, Mary Ann Heinz and together they built a strong marriage and family while having five children. He had a busy life - serving in the United State Army Air Force from 1944-1945 and being called back to active duty during the Korean conflict from 1950-1951. During his 'downtime' from service he worked for the West Chicago Post Office where he recalled delivering mail twice a day to the south side of town. He particularly enjoyed meeting the helicopter at Reed Park to pick up the air mail. In 1956 Don went to work at Kawneer (Alumax) Aluminum and retired after 31 years, as Manager of Purchasing and Inventory Control.
Don served as Winfield Township Trustee from 1973-1977 and Winfield Township Clerk from 1977-1985. In 1982 Don was elected State Representative of the 50th District and served from 1983-1993. One of his biggest accomplishments while in Springfield was working with Mayor Rennels and the residents of West Chicago to secure the cleanup of Kerr McGee.
Though that would signal a retirement to some, Don was appointed by the Governor of Illinois to be a Director on the Illinois International Port District and served on that Board until August 1998. He was a member of the West Chicago Lion's Club from 1995 to the present serving in different offices. He was also voted as 'Citizen of the Year' in 1998.
Don served as a Trustee for the West Chicago Fire Protection District from 2001 until the Present. He is also a Past Commander of the American Legion and spent many hours on projects for the West Chicago American Legion, including the treasure hunts and fish fries.
Don, and his wife, Mary Ann did enjoy some traveling after retirement, but mostly they enjoyed spending time with the family.
He is survived by his wife, Mary Ann, sons Steven (Cathi), Jim (Barb), and Rick, daughter Dona (Phil) Smith and daughter-in-law Linda; grandchildren Michael Hensel, Katie Hensel, Bree (Chris) Jorgensen, Brandi Kubajak, Sarah Hensel, Dawn Chorobik, Kristen Paris, Eric Chorobik, Britt Hensel and Matt Hensel. Brothers Wayne (Cheryl) Hensel, Bob (Jeanne) Hensel, and sister Marion (Wayne) Talley. He is also survived by many great grandchildren, step grandchildren, step great grandchildren and many friends.
He is preceded in death by a son, David Hensel, his parents Art and Edna Hensel, and brother Willard Hensel.
Visitation will be from 3:00 pm to 8:00 pm on Wednesday, February 29, 2012 at Norris Walen-Segert Funeral Home located at 132 Fremont St., in West Chicago. Prayers will be held on Thursday, March 1, 2012 at 9:30 am proceeding to St. Mary's Church, 164 N. Oakwood, West Chicago for a 10 am Mass. Burial at Calvary Cemetery in West Chicago.
Memorial contributions can be made to St. Mary's Church, 140 N. Oakwood, West Chicago or a charity of your choice.
For information 630-231-0060 or please sign the guest book at www.norriswalensegertfh.com

To order memorial trees or send flowers to the family in memory of Donald Hensel, please visit our flower store.