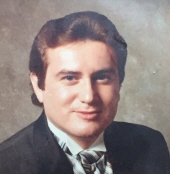 David Byrne , 63, passed away on Sunday, August 14, 2016. He is preceded in death by his parents, Andrew and Mary "May" Byrne (nee Coyle) and his two sisters Patricia Gottschlich (nee Byrne) and Evelyn Deering (nee Byrne). A loving and devoted uncle, David is survived by his five nephews, Dan (Erika Polacek) Gottschlich, Steve (Liz) Gottschlich, Greg Gottschlich, Michael (Megan) Deering, and Sean Deering. A memorial Mass will be held on Saturday, August 20, 2016 at Queen of the Angels Church , 2330 W. Sunnyside, Chicago IL at 10:30 a.m. Family and friends may begin gathering at 10:00 a.m. For info 630-231-0060 or www.norrissegertfh.com

To order memorial trees or send flowers to the family in memory of David Byrne, please visit our flower store.