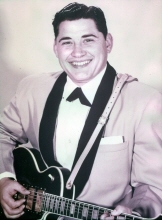 Clarence Shankle , age 83, a 65 year resident of West Chicago, passed away on Thursday, January 21, 2016. He was born on May 4, 1932 in Bennettsville, SC to John Shankle and Alberta Rainwater, the second oldest of eight sons. Clarence was united in marriage to Lucille Lathan on October 14, 1951. He worked over 43 years for Navistar/International Harvester as a supervisor in West Chicago and Broadview. Clarence was a longtime member of the West Chicago Lions Club. He taught music for 53 years, teaching guitar and banjo and also took pride in making his special “Shankle” guitars.

He was preceded in death by his parents; wife Lucille in 2013 and six brothers.

Visitation will be held on Monday, January 25, 2016 from 10 a.m. until time of funeral service at 12 noon at Norris-Segert Funeral Home & Cremation Services , 132 Fremont St., (one block north of Washington St. and Main) West Chicago. Chaplain Tim Friesema will officiate. Interment Glen Oak Cemetery in West Chicago. For Info 630-231-0060 or www.norrissegertfh.com

To order memorial trees or send flowers to the family in memory of Clarence Shankle, please visit our flower store.