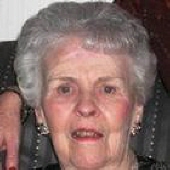 Clara Marie Poore (nee McCabe), 91, formerly of West Chicago, passed away on Tuesday, December 2, 2014. She was born on May 5, 1923 to Frank and Marie McCabe. Clara attended St. Mary’s grade school in West Chicago and graduated from West Chicago Community High School. On June 21, 1947, she was united in marriage to Jack Poore. Clara belonged to many organizations in the community and was a volunteer for many years in the Central DuPage Hospital gift shop. She enjoyed playing bridge, knitting, reading and spending time with her grandchildren.

She was preceded in death by her parents; husband, Jack; brother, John (Kathryn) McCabe and nephew, Timothy McCabe.

Visitation will be held on Friday, December 5, 2014 from 4 to 8 pm at Norris-Walen-Segert Funeral Home, 132 Fremont St. (one block north of Washington St. and Main) West Chicago. Prayers will begin on Saturday, December 6, 2014 at 9:30 am at the funeral home and proceed to St. Mary’s Church, 164 N. Oakwood, West Chicago for Mass at 10:00 am. Interment Calvary Cemetery in West Chicago.
For info 630-231-0060 or www.norriswalensegertfh.com

To order memorial trees or send flowers to the family in memory of Clara Poore, please visit our flower store.