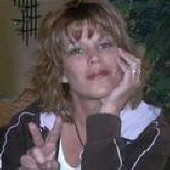 Cheryl "Cheri" Kerby (nee Matejka), age 44, of Mesa, AZ, formerly of West Chicago, passed away Friday, August 19, 2011. She was born on September 12, 1966 in Chicago, IL and became the cherished daughter of Wayne and Susan Matejka. Cheri was a graduate of West Chicago High School. She was united in marriage on August 25, 1990 to Garry Scott Kerby. Cheri was fun loving, warm person who could light up a room with her smile and personality. She had a love for all animals and a special love for her family. Cheri had a great love for people and her giving of her life as an organ donor.
Cheri is survived by her husband of 20 years, Garry "Scott" Kerby of Mesa, AZ; two sons, Ryan and Kyle Kerby of Mesa, AZ; parents, Wayne and Susan Matejka of West Chicago; one sister, Ellen Matejka of West Chicago; one brother, Daniel (FiancAC.e Kristen) Matejka of Batavia; brother-in-law, Dan Kerby; and nieces, nephews, family and friends.
She is preceded in death by her grandparents and brother, Timothy in 2009.
Memorial visitation will take place on Friday, September 9, 2011 from 4 pm to 8 pm at Norris-Walen-Segert Funeral Home, 132 Fremont St. (one block north of Washington St. and Main) West Chicago. Funeral service will be held on Saturday, September 10, 2011 at 10:30 am at Trinity Lutheran Church, 331 George St., West Chicago. Pastor David Balla officiating. Inurnment in Glen Oak Cemetery in West Chicago. 60185. 630-231-0060 or www.norriswalensegertfh.com

To order memorial trees or send flowers to the family in memory of Cheryl Kerby, please visit our flower store.