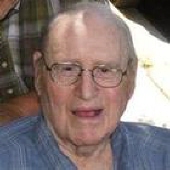 Charles W. Hallock, age 86, formerly of West Chicago, passed away on Tuesday, December 31, 2013. He was born on November 8, 1927 in Downers Grove to Bernard and Dorothy Hallock. Charles was a WWII US Army veteran. He retired from General Mills after 32 years of service. Charles enjoyed reading and was a collector of everything.
He is survived by his sons, William George (Shirley) Hallock of Cortland and Marland Teal (Rebecca) Hallock of North Aurora; grandchildren, Billy, Ann(Joseph) Wright, Patty (Marty) Gotsch and Amanda (Chris) Anderson; great-grandchildren, Rachel, Ashley, Shane Wright and Michael Anderson; sister, Peggy (Ned) Norton; and nieces, nephews, relatives and friends.
He is preceded in death by his parents; wife, Ethel, of 53 years in 2005; daughter DeLane; brothers, Bernard and Jimmy; and sisters, Grace and Mary.
Visitation will be held on Monday, January 6th, 2014 from 3 to 8 pm at Norris-Walen-Segert Funeral Home, 132 Fremont St., (one block north of Washington St. and Main) West Chicago. Funeral service will be held on Tuesday, January 7th, 2014 at 10:30 am at the Funeral Home with viewing at 10:00 am. Reverend Clark Richardson will officiate. Interment River Hills Cemetery in Batavia. Memorial contributions in his memory may be made to Crossway Chapel Fox Valley building fund or Waters Edge Bible Church missions.
For info 630-231-0060 or www.norriswalensegertfh.com

To order memorial trees or send flowers to the family in memory of Charles Hallock, please visit our flower store.