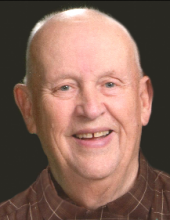 Charles J. (Gus) Gustafson , age 85, lifetime resident of West Chicago, Illinois passed away on Thursday, May 21, 2020. He was born on December 29, 1934 in Aurora, IL to Robert and Esther (Larson) Gustafson.  Charles was united in marriage on April 7, 1956 to the late Louise Streit.  Following a long successful career with Illinois Bell, he retired in 1991. Charles was a loving husband, a wonderful father and grandfather. He loved golfing, watching the Chicago Cubs, traveling, eating out, poker and especially family time with his wife, children, and grandchildren.

Due to the current situation all private family services will be held with burial at Resurrection Cemetery in Geneva, IL. A memorial Mass will be held at a future date at St. John the Baptist Church in Winfield. In lieu of flowers, contributions in Charles’ memory may be made to Wounded Warrior Project, www.woundedwarriorproject.org

Arrangements by Norris-Segert Funeral Home and Cremation Services for info 630-231-0060 or www.norrissegertfh.com

To order memorial trees or send flowers to the family in memory of Charles 'Gus' Gustafson, please visit our flower store.