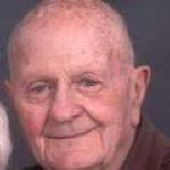 Carl A. Mennecke age 87, of Geneva. He was born on August 25, 1925 in Elmhurst and was called to his heavenly home on Monday, April 1, 2013.
Carl spent most of his childhood and young adulthood living in Maywood. Upon graduation from Proviso High School in 1943, he became a member of the US Air Force as a flight cadet. World War II ended in 1945 before he completed his assignment and was honorably discharged from the service.
Carl was employed by Commonwealth Edison until he enrolled as an electrical engineering student at the University of Illinois (Navy Pier Campus). In 1945 he met and wooed Dolores Heisler and in August 1949 they were married and moved to the U of I campus (Champagne-Urbana) where Carl completed his education. "Dee" (an R.N.) worked in order to make ends meet. After his graduation, he went on to work for Commonwealth Edison for over 39 years until his retirement in 1989. One of Carl's greatest enjoyments was spending time with his family and friends each summer at Camp Luther, Wisconsin.
Carl is survived by his loving wife Dolores of 63 1/2 years; five children, Diane (Steve) Nece, Dean (Suzanne) Mennecke, Pamela (Mike) Becker, Paula (Gary) Goforth and Carla (Kevin) Sandon; 13 grandchildren; 20 great-grandchildren; sister, Dorothy (Robert) Bonthron and sister-in-law Martha Mennecke.
He was preceded in death by his parents, Carl and Alma; brother, Richard; and twin grandchildren Amy and Ryan Becker.
Visitation will be held on Wednesday, April 3, 2013 from 3 to 8 pm at Norris-Walen-Segert Funeral Home, 132 Fremont St., West Chicago. He will lie in state on Thursday, April 4, 2013 from 10:00 AM until time of service at 11:00 AM at Trinity Lutheran Church, 331 George St., West Chicago. Reverend Dr. David Balla officiating. Interment Glen Oak Cemetery in West Chicago. Contributions in Carl's memory can be made to Trinity Lutheran Church, 331 George St., West Chicago, IL 60185. For info 630-231-0060 or www.norriswalensegertfh.com

To order memorial trees or send flowers to the family in memory of Carl Mennecke, please visit our flower store.