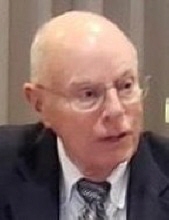 Burt Samuel Andrews III , age 85, passed away on November 14, 2020 at his home in West Chicago. Burt was born on January 11, 1935, first son of Burt Jr. and Zola Andrews, in Elgin, IL. In 1939 they and their second son, Jack, moved to Springfield, IL. Burt graduated from Springfield High School in 1953; received a degree in Horticulture from Iowa State College (now University), Ames, IA in 1957; was commissioned 2nd Lieutenant in the Army Artillery at that time, served in Korea 1958-1959; received an MBA in marketing from Northwestern University in 1970.

He moved to West Chicago, IL 1959 and worked for Ball Horticulture Co, for 36 years. He met his wife, Dorothy, there. They have been married for 58 years.

Survivors include his wife and their children: Julie and Joe Buenrostro and her daughter Josie Mattern; Burt IV and Pam Andrews and their daughter Claudia; David and Dana Andrews and their children Alexa and Cael. His brother, Jack (Carole), Springfield, IL, sister-in-law Sharron (the late Dean) Bitner, Sycamore, IL and their families also survive. Also, cousin Robert (the late Joan) Howard, West Chicago, IL, and their family survive as does the family of the late Richard (Frieda) Howard.

Following the example of former pastor, Kathleen Hendricks, Burt expressed a preference for floral bouquets for the living as a reminder of life’s beauty.

For Info Norris-Segert Funeral Home and Cremation Services- 630-231-0060 or www.norrissegertfh.com

To order memorial trees or send flowers to the family in memory of Burt Andrews III, please visit our flower store.