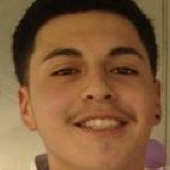 Brian Sotelo , age 18, of Montgomery, passed away on September 23, 2014 at his home in West Chicago. He was born on December 16, 1995 in Winfield, Illinois to Alejandro Sotelo and Consuelo Hernandez. Brian grew up in Montgomery. He worked at Sotelo's Tree Company in West Chicago.

Visitation will be held on Sunday, September 28, 2014 from 2 to 8 pm at Norris-Walen-Segert Funeral Home, 132 Fremont St. (one block north of Washington & Main St.) West Chicago. Funeral Mass on Monday, September 29, 2014 at 10 am at St. Mary's Church, 164 N. Oakwood, West Chicago. Burial will follow at River Hills Cemetery in Batavia.For information 630-231-0060 or www.norriswalensegertfh.com

To order memorial trees or send flowers to the family in memory of Brian Sotelo, please visit our flower store.