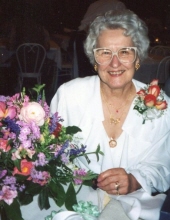 Angelyn Gill Cliff , age 101, of Carol Stream and formerly of West Chicago, passed away on July 26, 2017 at Windsor Park in Carol Stream. She was born on September 27, 1915 in Jackson Hill, IN to Anthony and Frances Gill. Angelyn was an active member of St. Mary’s Church for over 60 years where she served as Eucharistic Minister (at Church and to the homebound), Lector and a member of the Catholic Daughters of America and the Rosary Society.  She was an artist and member of the DuPage Art league where many of her paintings were on display. She moved to Chicago at the age of 18 and worked as a Secretary and Administrative Assistant at Montgomery Ward until moving to West Chicago in 1940.  She worked in Real Estate for many years and was a dedicated homemaker to her family that she loved so much.

She was preceded in death by her parents, daughter and son-in-law, Mary C. and Gary W. Moore in 2000; husband, Charles of 65 years of marriage in 2003; son, William R. Cliff in 2016; sister, Carolyn Vandament and brothers, Zigbert Gill and Joseph Gill.

To order memorial trees or send flowers to the family in memory of Angelyn Cliff, please visit our flower store.